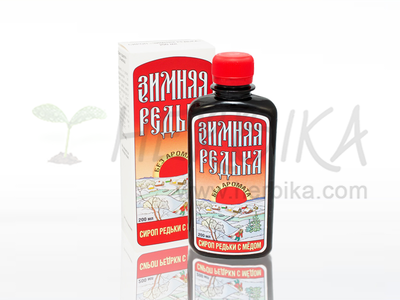 It is recommended as a dietary supplement. Helps alleviate cough in seasonal colds, has a healing effect on gout, kidney stones, bladder, bile duct.

Black radish (Raphanus sativus varieta niger L.) is an edible root vegetable that was domesticated in Europe long time ago, it grows everywhere and it is used in vegetable gardening. In ancient Egypt this root was considered sacred and used together with garlic. Radish improves digestion, stimulates the secretion of gastric juices, stimulates appetite. Fiber of radish has a beneficial effect on the activity of intestines, promotes excretion of excess cholesterol which is essential in the prevention of atherosclerosis. Due to stimulation of excretion of bile the use of radish is beneficial for cholecystitis, radish juice soothes inflammation of the bile duct, prevents formation of stones and sand. In southern Germany, where the radish is eaten significantly more than in the north, the number of cases of gallbladder inflammation is significantly lower; it is believed this is due to radish. Application is also recommended during inflammation and cirrhosis. Radishes should not be eaten only during heart disease, gastritis with acidity of gastric juice, gastric ulcer and duodenal ulcer. Radish has a strong antimicrobial action thanks to which freshly grated radish and juice can be used during the treatment of purulent wounds and ulcers. Grated radish can be used as a means for massaging during rheumatic and arthritic pains of the joints, inflammation of muscles, radiculitis and neuritis. In folk medicine radish is valued as a diuretic. It is particularly recommended for treating gout, kidney stones and urinary bladder.

Folk medicine has long used the black roots of radish seed (Raphanus sativus var. Niger L.) and its fresh juice for its multiple healing properties. A syrup prepared from radish juice and honey has been long time regarded by people as one of the most effective expectorant and emollient to counter cough and broncho-pulmonary disease. Combining the healing properties of honey and radish juice is the key to a successful fight against inflammations of the upper respiratory tract.

Peppermint oil has antispasmodic, sedative, antiseptic, and analgesic effect, makes breathing easier and creates a pleasant sensation of coolness in the "flaming" throat.

Contraindications: children under 12 years old, pregnant and lactating women, intolerance to individual components of the product, stomach ulcer and duodenal ulcer, gastritis in the acute stage.

Serving: adults and children over 12 years 1 tablespoon (15 ml) during meals 3-4 times a day, you can wash down with water or juice. Shake before use.

Recommended duration of use: from 3-5 days to 1 month.