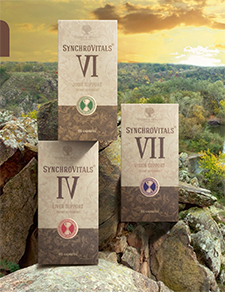 SynchroVitals is a name of the series of preparations that restore the cellular level and protect the various organs and systems in the body with respect to their biorhythms. The composition of preparations is rigorously balanced and is divided into morning (stimulant) and evening (restorative) complexes, which operate only at this stage and as actively as possible.
The active ingredients in the morning are aimed at increasing energy processes in cells, and in the evening – for their restoration and revitalization. This process not only helps to normalize the biological rhythms of the body, but several times increases the effectiveness of the action of the individual components.

Everything on our planet is affected by periodic changes. The changes between day and night, ebb and flow, the change of seasons are the most noticeable changes. Since the beginning of life on Earth, all evolved under conditions of periodic changes in the environment. These natural rhythms are reflected in human physiology as so-called biological rhythms or biorythms that allow us to live. Everything that happens in our body, is subject to cyclical changes ranging from a few seconds to several years. During the day and night, our heart rate, respiratory rate, blood pressure, hormone levels and hemoglobin status are constantly changing. Contemporary people suffer from a lack of coordination of biorhythms, in scientific language, this condition is called desynchronosis. In many ways, it is a result of the synthetic environment, with which we are surrounded – artificial light, time shifts, climate changes, excessive consumption of coffee, tea – just anything that is inconsistent with our internal biorhythms and what puts them into imbalance. That is why recently we hear that the origin of many diseases and premature aging is a result of violation of the natural order of biorhythm. Chronobiology is the medical science, studying biological rhythms and their effect on human health. Although this is a relatively young science, it has greatly helped to improve human health by establishing procedures of utilization and mobilization of internal resources of the body and not by the use of artificial and foreign to our body pharmacological substances.
Thanks to the new findings, you can use known for centuries and natural biologically tested active substances in a special regime aimed at normalization of biorhythms of the body and get a quick effect where it previously was not possible.

There are no products in this section yet