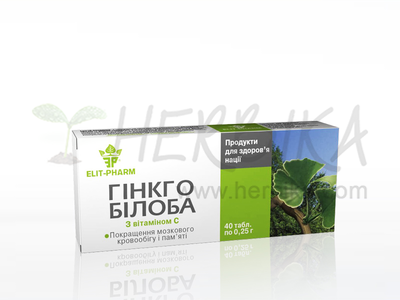 Ginkgo biloba is one of the oldest living trees from the prehistoric times, it is a fascinating tree which can live up to one thousand years and botanists call it a living fossils. It comes from China where it is recognized as a national tree, it is widely used in traditional medicine and was once known as a "silver or white fruit"", then "silver apricot"".
Extract from Ginkgo is a popular medicinal component for natural medicine. The extract is usually made from the leaves, in China however, the rare seeds from this prehistoric beautiful tree are prefered. Ginkgo leaves contain components that thin down the blood and help to improve muscle tone in the vessel walls, thereby improving and enhancing blood circulation. Thanks to this feature Ginko is used to improve brain activity, memory and ability to concentrate. For older people it is successfully used for treating dizziness, depression, forgetfulness, headaches and ringing in the ears (tinnitus).
Ginkgo biloba is also very well established for treatment of vascular insufficiency, spasms in legs and according to some studies it has similar effects as commonly psrescribed medicine to treat blood clots.

A lot of successful research on Ginkgo wasn't focused on therapeutic use from parts of the tree, but on standardized extracts of Ginkgo and therefore positive research results have been repeated and are scientifically credible. Recently however controversial articles about research that showed ineffectiveness of Ginkgo have appeared. In these studies organized by the "Western society" weren't used extracts made according to the effective traditional methods, but according to our "Western methods"", so of course extracts were ineffective and the oldest living tree whose extracts were successfully used in Chinese medicine over several thousand years was callously labeled as ineffective.

Use: 1 tablet daily during meal for a period of 3 weeks. For best results, experts recommend taking Ginkgo for a minimum of 3 months.