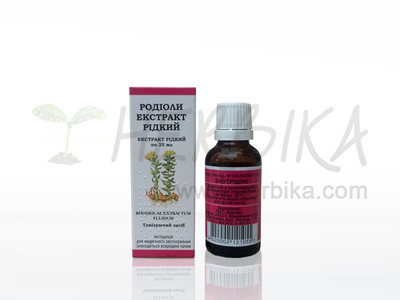 Rhodiola rosea also called Golden root is considered in traditional medicine as one of the "herbs for women", because of its significant healing effects on mental and emotional health, especially needed for women. Traditionally Rhodiola has been used for improving mood, physical and mental performance, to cope with stressful life, recovery after tough ilnesses or mental disorders.

Usage: 5-8 drops 2-3 times a day in a small amount of water 30 minutes before food. Therapy lasts 3 weeks at least or when it is desirable or necessary.

Based on many years of Russian research, the root of Rhodiola rosea, commonly named "Golden Arctic root", rivals Eleutherococcus as an important adaptogen. The active constituents believed to be responsible for the adaptogenic qualities in Russian Rhodiola rosea include a group of unique phenylpropanoids called ""rosavins", including rosavin, rosin, and rosarin. These compounds are not found in other Rhodiola species and they showed strong protective effects to the nervous and endocrine system and possess antifatigue, immune-enhancing, anticarcinogenic, antimetastatic, chemo-protective, antioxidative, and antimutagenic effects.

In Middle Asia, Rhodiola rosea was considered the most effective remedy for cold and flu - prevention as well as treatment. A number of human and animal studies on Rhodiola rosea extract have shown that it increases physical work capacity and dramatically shortens recovery time during high-intensity exercise. These studies include regular humans as well as Olympic-level athletes. The Rhodiola group increased work capacity by nine percent, the Eleuthero by six percent.

Russian Rhodiola has the ability to assist the body at times of stress, particularly cardiac stress, is anti-oxidative, preventing and minimizing oxidative damage in the pancreas and heart caused by excess stress. This Russian Golden Root protects against altitude sickness, minimizing cardiopulmonary dysfunction.

Russian rhodiola also has been shown to enhance the antitumor effects of the chemotherapeutic drug cyclophosphamide (Cytoxin), while at the same time assisting in the regenerative process of the immune system. It also shortened the recovery time on suppressed white blood cells following chemotherapy or radiation treatment.

Russian research has shown that russian rhodiola is helpful in conditions of depression and schizophrenia by increasing serotonin and decreasing the enzyme responsible for monoamine degradation, monoamine oxidase, and catechol-O-methyltransferase.